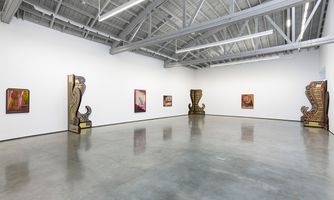 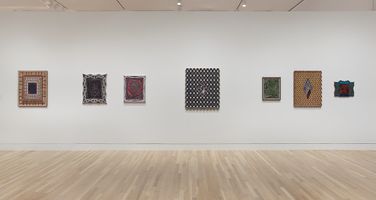 Zach Harris’s carved panel paintings unfold complex utopian and dystopian worlds. His psychedelic visions, which almost verge on abstraction, immerse viewers in the unfathomable depths of mysterious cosmologies. The art-historical density of his aesthetics is haunting, in a sense similar to that of late-nineteenth-century symbolism. While the bright coloring of his obsessively detailed paintings is reminiscent of the highly demanding ornamental quality of Persian miniatures, his intricate hand- or laser-engraved frames evoke the elaborate woodwork of Christian altarpieces. Harris is a fervent practitioner of meditation, and the meticulous repetition of painted or carved patterns and motifs within his compositions operates like a mantra. At the same time, it creates a hallucinatory play between the materiality of the relief and its optical illusion, bringing to mind the radial vibrancy and spiritual dimension of Tibetan mandalas. His syncretic art suggests timeless rituals, which, whether lost or prescient, have yet to be deciphered.

Harris’s work is included in the collections of the Hammer Museum, Los Angeles and the San Francisco Museum of Modern Art, San Francisco, among others.

2017
- Please fasten your seat belt as we are experiencing some turbulence, Leo Xu Projects, Shanghai, China