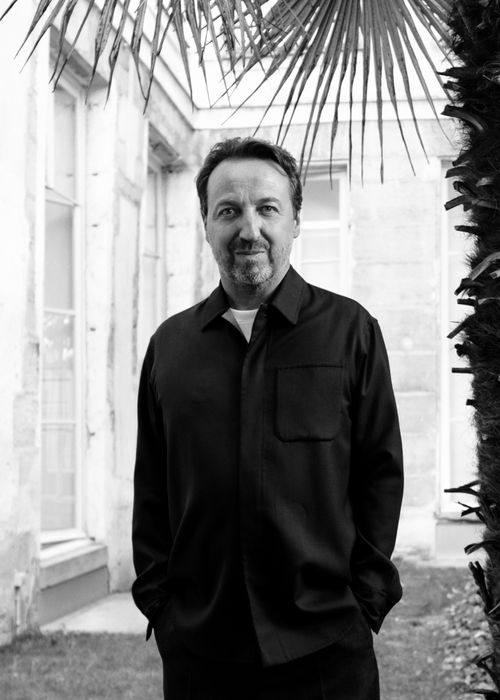 DOWNLOAD PERROTIN FULL PRESENTATION
Emmanuel Perrotin founded his first gallery in 1990 at the age of twenty-one. He has worked closely with his roster of artists, some for more than twenty-five years, to help fulfill their ambitious projects. Perrotin has galleries in 7 cities: Paris, Hong Kong, New York, Seoul, Tokyo, Shanghai and Dubai totaling approximately 7,800 square meters (84,000 square feet) of exhibition space.

Located since 2005 in an eighteenth-century mansion, Perrotin has three gallery spaces totaling approximately 1,600 square meters (17,000 sq. ft.) in the Marais district of Paris. Two years after it opened, the original Paris gallery expanded into its space on Impasse Saint-Claude. In 2014, Perrotin opened a 700-square-meter (7,500 sq. ft.) showroom known as the Salle de Bal, in a former ballroom in the Hôtel d’Ecquevilly, a seventeenth-century hôtel particulier. In June 2020, Perrotin opens a space totaling 70 square meters (750 sq. ft.) on Avenue Matignon in the west of Paris.
In 2021, a gallery dedicated to secondary market takes a five-storey townhouse, (4,090 square feet, 380 sq. m.) located 8 avenue Matignon nearby Christie's and Sotheby's.
In all, the Paris gallery spaces amount to 29,600 square feet (2,750 sq. m.).

In May of 2012, Perrotin opened its Hong Kong gallery on the seventeenth floor of 50 Connaught Road Central (650 sq. m./approx. 7,000 sq. ft.), overlooking Victoria Harbour. In 2020, the Hong Kong gallery moved across the harbor to K11 ATELIER Victoria Dockside on the Tsim Sha Tsui waterfront.

From 2013 to 2016, Perrotin New York was housed in a historic building on the Upper East Side’s iconic Madison Avenue. After three successful years there, the gallery expanded in April of 2017 to a 2,300-square-meter (25,000 sq. ft.) space, relocating to 130 Orchard Street in New York’s most dynamic arts neighborhood, the Lower East Side. Perrotin New York includes a bookshop featuring unique editions and books published by the gallery.

In 2016, Perrotin inaugurated a 240-square-meter (2,580 sq. ft.) space in Seoul. Perrotin Seoul is located in the heart of Jongno-gu district, the city’s museum and gallery district, in close proximity to the National Museum of Modern and Contemporary Art and Daelim Museum and just in front of the Blue House, the official residence of the President, and Gyeongbok Palace.
A second gallery in Seoul, Perrotin Dosan Park, opened in August 2022 in the heart of Seoul’s new district of culture and luxury flagships where Horim Art Center, SONGEUN Art and Cultural Foundation, Maison Hermès Dosan Park, Maison Louis Vuitton Seoul, and two major Korean auction houses are located. The building, comprising two floors and offering exhibition space of about 250 square meters (2,680 sq. ft.), has been designed by KIAS (Kentaro Ishida Architects Studio) in collaboration with Yoki Design and Kenny Ho.

In June of 2017, Perrotin opened a space in Tokyo on the ground floor of the Piramide Building. The gallery is located in the center of the Roppongi area, a vibrant cultural neighborhood that is home to a large number of museums, including the Mori Art Museum, Suntory Museum of Art, and National Art Center, as well as many well-established galleries. In 2019, the gallery expanded to a 230 square meter (2,500 sq. ft.) space. In 2019 the gallery expanded, and it now totals 230 square meters (2,500 sq. ft.) of exhibition space in Tokyo.

In 2018, Perrotin launched a gallery in Shanghai, in the heart of the city’s Bund quarter. Perrotin Shanghai occupies the top floor of a historic three-story brick building known as the Amber Building, a former warehouse built in 1937, used by the Central Bank of China during the Republican period. Totaling 1,300 square meters (14,000 sq. ft.), the gallery space includes a mezzanine and several exhibition rooms. In keeping with the building’s modernist elegance, original 1930s elements have been preserved, including the wooden beam ceiling, which is 6 meters (20 ft.) in height.

In 2022, Perrotin opened a new gallery in Dubai, located in the DIFC, the heart of city, not far from Christie’s, Sotheby’s and other galleries. The new 100-square-meter space will present primary market works by artists represented by the gallery alongside secondary market works, a recently launched and successful business that continues to grow.

The gallery has expanded its mission in recent years, most notably through the production of thoughtful editorial content, such as podcast and video, as well as developing a programmatic calendar, which includes panel discussions, education workshops for children, and concerts.

The gallery also publishes catalogues, editions, and goodies, available in its bookstores.