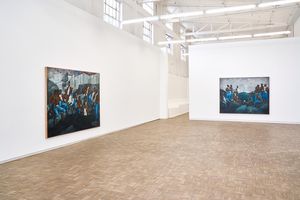 Educated in a shared art studio of South African painters in his early twenties, soon after deciding to dedicate his life to art, Cinga Samson has recently established himself as an important new voice in contemporary painting. His oil works on canvas manifest echoes of what he describes as the superstitions and spirituality integral to his upbringing in the town of Ethembeni and its surrounding countryside. Desire, aspiration, and celebration of identity drive much of his work, for which he draws inspiration from fashion, heritage, and the works of Paul Gauguin and Andrew Wyeth, among others. Samson’s process incorporates the use of sketches and photo shoots; he carefully selects elements within a composition to be replaced with others in order to achieve a sensual equilibrium between the real, the imagined, and the accentuated. The recipient of the 2017 Tollman Award for the Visual Arts, he exhibited at the Armory Show, New York, in 2018.

2013
In the night I remember, Stevenson, Cape Town, South Africa