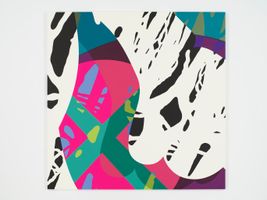 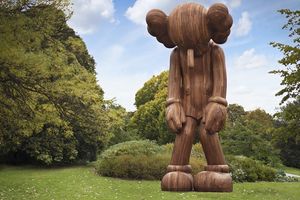 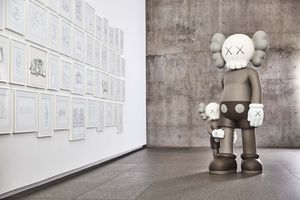 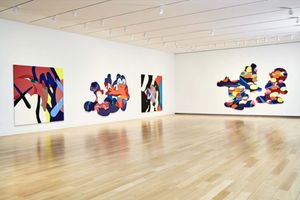 Continuing in the tradition of pop art, his influential work crosses painting, sculpture, and printmaking along with fashion, merchandise, and toy production while taking inspiration from art history and popular culture. In his paintings, KAWS deconstructs his appropriation of iconic characters into forms that draw on the tradition of abstract painting.

KAWS has exhibited internationally in major museums. His most recent solo exhibitions include KAWS: WHERE THE END STARTS, which originated at the Modern Art Museum of Fort Worth, Texas, and traveled to Yuz Museum Shanghai, and KAWS, presented at Yorkshire Sculpture Park and Longside Gallery, West Yorkshire, United Kingdom.

Considered one of the most relevant artists of his generation, KAWS engages audiences beyond the museums and galleries in which he regularly exhibits. His prolific body of influential work straddles the worlds of art and design to include paintings, murals, large-scale sculptures, street art, and graphic and product design. Over the last two decades KAWS has built a successful career with work that consistently shows his formal agility as an artist, as well as his underlying wit, irreverence, and affection for our times. He often draws inspiration and appropriates from pop culture animations to form a unique artistic vocabulary for his works across various mediums.
Now admired for his larger-than-life sculptures and hardedge paintings that emphasize line and color, KAWS’ cast of hybrid cartoon and human characters are perhaps the strongest examples of his exploration of humanity. His refined graphic language revitalizes figuration with big, bold gestures and keen, playful intricacy. As seen in his collaborations with global brands, KAWS’ imagery possesses a sophisticated humor and reveals a thoughtful interplay with consumer products. Highly sought-after by collectors inside and outside of the art world, KAWS’ artworks, with their broad appeal, establishes him as one of the most prominent artists in today’s culture.
KAWS (b. 1974, Jersey City, New Jersey; lives and works  in Brooklyn, New York) has exhibited internationally in major museums. His recent solo exhibitions include KAWS: WHERE THE END STARTS, Modern Art Museum  of Fort Worth, Texas (2016) which traveled to the Yuz Museum, Shanghai (2017); KAWS, Yorkshire Sculpture Park and Longside Gallery, West Yorkshire, United Kingdom (2016).  His work has also been the subject of solo exhibitions at the Contemporary Art Museum St. Louis, Missouri (2017); Brooklyn Museum, New York (2015); Centro de Arte Contemporáneo, Málaga, Spain (2014); Nerman Museum of Contemporary Art, Overland Park, Kansas (2013); Pennsylvania Academy of Fine Arts, Philadelphia (2013); and the High Art Museum, Atlanta, Georgia (2011).
His monumental sculptures have been shown in prestigious locations including the Rijksmuseum, Amsterdam, the Yorkshire Sculpture Park, United Kingdom and the Brooklyn Museum, New York.

The Nature of Need

Pay the Debt to Nature